A tagged lobster has walked from the East Coast to the West Coast. And it seems its buddies came with it.

A young lobster was tagged and released near Moeraki, on the East Coast of the South Island, in 2017. Less than two years later, on 2 April 2019, it was recaptured by Regan Smith off Dusky Sound on the West Coast, having walked down the coast and around the bottom of the South Island.

That’s a journey of over 600 km, on the seafloor. The creature averaged about a kilometre a day for two years, and grew a couple of size grades along the way, from about a 3A to a small B.

You might have seen the recent RLIC report or CRA8 newsletter that mentioned this.

What's new is that last month Peter Young recaptured another animal in the same area, with a tag number very close to the first, just 11 places away in sequence. It's being checked still, but chances are it was tagged in Moeraki around the same time.

Just how many lobsters are making this journey, and what drives them? 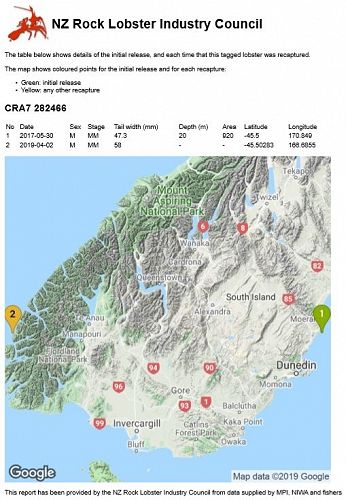