Adam Rusk: Auckland Factory over the last few months has welcomed three new full-time staff to the facility. Gursahib has a background in micro lab work and is also a Class 2 truck driver. Denise has come from a retail position and has a large family and is actively involved in sports. Leon’s previous employment was with Big Chill Distribution as a truck driver and has extensive knowledge of transporting chilled goods and is also the president of a fishing club based on the North Shore.

Richard Hendry:  When the Auckland factory was built in 2015, we had planned to increase the holding capacity when the need arose. We have been working hard over the last three months to complete this work, which includes increasing the number of usable tanks from 6 to 9, and the capacity from 20 to 30 tonnes.

All the filtration and refrigeration gear has been installed and is now up and running, and the new biofilter has been conditioned ready to receive lobsters. There are a few minor jobs still to complete, after which system three will be ready to go by mid-November. 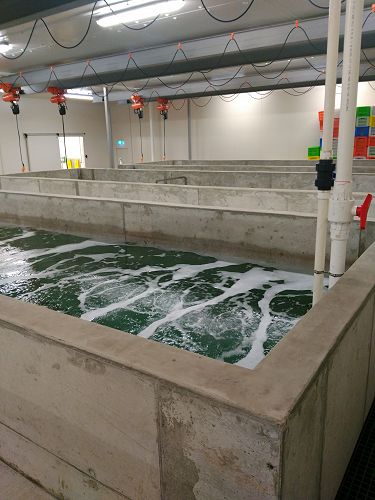